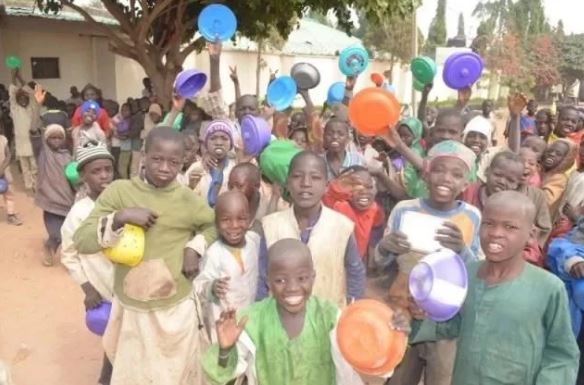 If you have lived in the northern part of Nigeria, the common sight of the caravan of almajiris roaming the streets in rags and begging plates may not come as anything strange. For first time visitors, the sight is grisly, inhumane and unpardonable. Sadly, only a handful of the northern elites had the courage to speak against this practice over the years. We must be grateful to Covid 19 in a way for providing the space to kiss this practice goodbye.

The total eradication of this pre-colonial practice should have been the major pre-occupation of our leaders long before now. The northern leaders resisted previous attempt by former President Goodluck Jonathan, who built schools so they can be out of the streets.

The almajiri system was a well thought out plan in Islam to provide Islamic teachings, moral values and literacy at a time western education was unobtainable in the sub-region. Over the time, with the advent of formal schools, population explosion and new technologies, an almajiri would today, be living in 15th century. Not even in Saudi Arabia or other parts of Middle East will you find the almajiri system except in Nigeria, Mali, Chad, Niger Republic and Cameroun.

Worrisome about the practice is its capability to dehumanize a child. One experience that has haunted me over the years was in Zaria, when I visited there many years ago, on holidays. On that fateful evening, I went out with a friend and returned quite late at about 10pm. We just alighted from the vehicle when we noticed a young lad of about 6 years old, squeezing into the wall of a tiny veranda of the building, trying to avoid the stream of rain droplets.

The weather was cold as it was drizzling. Through the window, we could see the lights and hear voices of children playing inside the house with their parents. But this boy was outside in the cold. And when we asked him in Hausa, what he was doing outside at that odd hour, he replied in very weak voice that he was sick. My friend asked of his parents and whether he has taken drugs and food. The poor boy replied that he was an almajiri and that he was hungry too. At that moment tears rolled down my cheeks. Obviously because my friend lived in the neighbourhood, he moved away and explained that the master of the boy was the one inside the house with his family. The man and his children were reeling in the comfort of the warmth of their home, while this poor underage remained outside in the cold of the night. The clatter of the noise coming the children inside the house was enough pain to kill a deprived child.

I begged my friend to allow us take the boy home so we could take care of him since he was looking abandoned. We could do that for obvious reasons but gave him some money, which I am sure he will surrender to the man inside the warmth of the house with his family. Such a cute little lad would in the morning of the next day, grasp his beggars’ plate and roam endlessly for leftover foods. And in his mind, he would also wonder, why will other children be heading to school but he is staying back in the streets to beg to survive? He may assume the world is not his friend since he was denied of love like others. Why will the child not take up arms against the society at any slight provocation?

A 2014 UNICEF report put Nigeria on the wrong side of history. Out of the 13.2 million out-of-school children in the world, 9.2 million of them were domiciled in northern Nigeria, accounting for 72% mainly due to the almajiri culture. If we add this to the 2.5 million people displaced by insurgency in the region, we will understand the danger that loomed ahead us.

So when the Northern Governors Forum took a collective decision recently to end the almajiri system completely, it was with great joy many Nigerians received the news. Eccentric politician and Governor of Kaduna, Nasir El-Rufai will go down in history as a progenitor of this newfound movement against an obsolete system. Former Emir of Kano, Mallam Sanusi Lamido Sanusi will join him in the hall of fame.

Meanwhile this same almajiris has produced many senators, governors and presidents in the north through their votes but only to be returned to the backwaters after each election. To the political elites, they were mere tools as far as they remained dirty, hungry and unkempt; and not given access to education. Yet these politicians do not mind them becoming miscreants, delinquents, nuisance, petty thieves and Boko Haram recruits to kill and maim fellow citizens as far as they are at their beck and call. If they were allowed to speak, they could ask what their sins are?

Dramatically, when people clamoured for their re-integration and abolishment of the practice, some elites whose children were enrolled in the best schools around the world protested and described it as their heritage. Can they donate their children to the almajiri practice? What a world. Government should give priority to these returnee almajiris, provide education for them and allow them aspire in life. That way they will no more be liabilities but agents of development for their fatherland. The disparity between the northern children caged by almajiri and their southern ones could be erased through education. The future is certainly now in our hands. END.

Ikpasaja can be reached on [email protected]