Governor Obaseki opens up on next move - DABATVNEWS 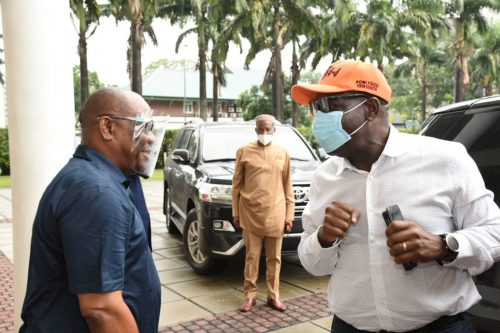 Embattled Edo State Governor Godwin Obaseki has said he will be making his next move known after meeting with President Muhammadu Buhari.

TheNewsGuru.com (TNG) reports the Edo State Governor made this known on Sunday via Twitter shortly after news emerged that he was in Rivers State to visit Governor Nyesom Wike.

Obaseki, who is seeking a second term in office, and who was recently disqualified from participating in the gubernatorial primary by the All Progressives Congress (APC), also said he is still consulting with his supporters on his next move.

“I appreciate the sustained show of solidarity, support and goodwill from Edo people and Nigerians in the face of injustice by the All Progressives Congress screening committee. I will be making my next move known after I complete consultations with my supporters and meet with President Muhammadu Buhari,” Obaseki said.

While details of Obaseki’s visit to Governor Wike were still sketchy at the time of filing this report, there are rumours that the Edo State Governor is planning to defect to the opposition Peoples’ Democratic Party (PDP) to contest the September 19 governorship election.

Read More: Governor Obaseki opens up on next move