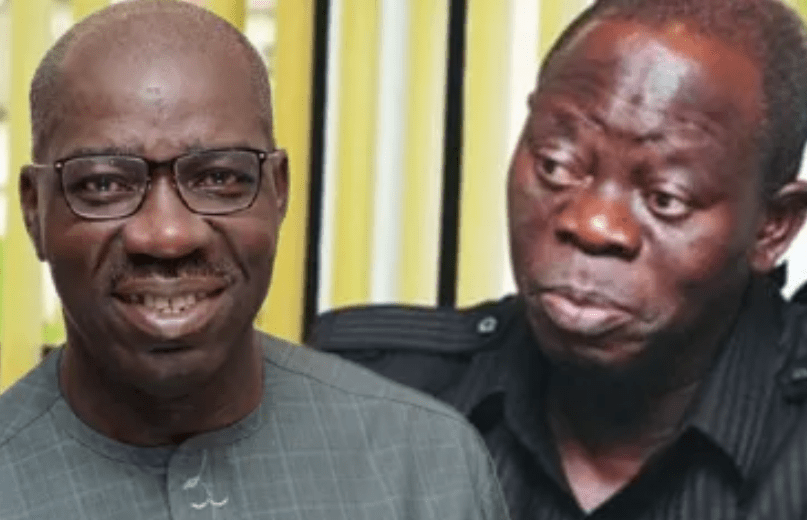 …he’s still having sllepless nights on that issue

A top chieftain of the All Progressives Congress, APC in Edo state has pleaded with Edolites to  stop blaming Comrade Adams Oshiomhole over the disqualification of Edo state Governor, Godwin Obaseki as he is simply trying to avoid the Bayelsa legal debacle.

The APC chieftain who spoke under the condition of anonymity to Thenewsguru. com said:

“We should stop blaming the comrade over Obaseki’s disqualification because the Bayelsa legal debacle is still haunting him till date.

“He received all the blames as the chairman of APC because it was largely believed the party didn’t do a proper screening which made us lose the state to opposition.

“As a right thinking party loyalist do you expect him to fall into the same legal pitfall that made APC to lose a Niger Delta state.

The chieftain explained that ” all the documents submitted by Obaseki had question marks and some critics felt it should be overlooked a second time.

“If he allows it and the opposition this time around decide to apply the Bayelsa formula through the courts, who will receive the highest blame, is it not the comrade, he wondered.

“The affidavits he submitted were not in tandem with his credentials, for his HSC he simply attached a testimonial from Institute of Continuing Education, ICE and you want the party to overlook all these discrepancies.

“We can’t continue to progress in error as the party cannot afford to lose Edo to the opposition and remember it’s only the state we have in this region.

“At this stage, caution is the torchlight the comrade is holding to avoid embarrassing legal pitfalls because the party would hold him responsible.

Recall that another party chieftain,  former Governor of Edo state, Senator Oserheimen Osunbor had recently told party members in a statement to with caution to avoid legal pitfalls that could rubbish the party.

Osunbor had advised all the warring party men to embrace peace before the primaries scheduled for June 22.

The Professor of Law who is also a member of the APC national Caucus explained that:

“The crisis in Edo State Chapter of All Progressives Congress (APC) which has simmered for about two years now threatens to boil over as we draw closer to the Party’s Gubernatorial primaries on June 22. This portends disastrous consequences for the Party and the people of Edo State unless it is resolved promptly before the primaries.

“Given my position in the Party I have made efforts outside of public glare towards bringing about reconciliation by speaking to the two leading protagonists, the National Chairman Comrade Adams Oshiomhole and His Excellency the Governor of Edo State Godwin Obaseki as well as some of their supporters.

“I also tried to rally some elders of the Party from the State to broker peace. It is common knowledge that our revered royal father, His Royal Majesty the Oba of Benin, Oba Ewuare II made his own efforts including appealing to our President Mohammadu Buhari to help broker peace among these two illustrious sons of Edo State.

” It is also believed that their mutual friend Dr. Aliko Dangote made repeated efforts at reconciliation to no avail. So did a number of others that I know.

When therefore the National Caucus of the party resolved at its meeting of 21 November 2019 to institute a National Reconciliation Committee to address the crises in various states of the Federation, which resolution was upheld by a decision of the National Executive Committee of the party the following day, there seemed to be light at the end of the tunnel.

” However, this has not happened till date as the National Reconciliation Committee which was reconstituted in February 2020 has not yet completed its assignment.

“There is now a chance that the Committee may be confronted with a fait accompli and overtaken by events if the Edo primaries (and guber elections) are held before it concludes its assignment.

“That would be tantamount to medicine after death. It will be extremely risky and ill-advised for the party to conduct its primaries, talk less of going into the governorship election bitterly divided; hence it has become urgent and compelling to hasten the process of reconciliation of all aggrieved persons without further delay.

“The reason that reconciliation is imperative is that if the Party conducts rancorous primaries and goes into the governorship elections divided, winning will become more difficult than it should be ordinarily, given the weakness of the opposition in the State.

“Even if the APC candidate wins the election the victory will be tenuous because of the threat of litigation that is almost certain to follow. This is why we must as a party tread with caution.