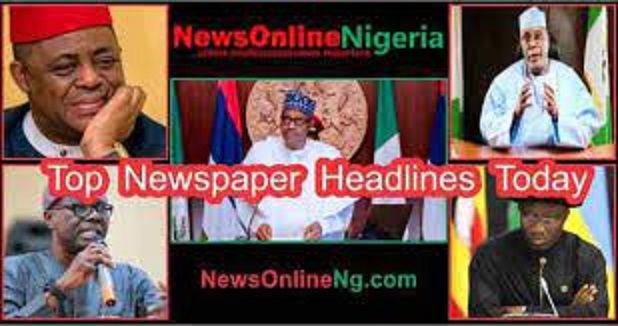 According to him, the Senate President must avoid bills that may destroy the country and ruin the future of Nigerian youths.

“Thus says the Lord:…People will coerce him [Lawan] to sign laws that can destroy Nigeria and ruin the future of the youths. He must be cautious and prayerful because the looming crisis will burst,” he said….Continue Reading.

Lagos Government has taken action against schoolgirls smoking shisha in a viral video.

NewsOnline Nigeria reports that the schoolgirls smoking shisha in viral video, while still in their school uniforms have been suspended and the Lagos State Government has ordered their rehabilitation.

In the disturbing video, the young girls were filmed in a sitting room taking turns to smoke shisha through the pipe.

According to Vanguard, the five young girls have now been identified as students of Oreyo Senior Grammar School, Igbogbo, Ikorodu area of the state.
The Special Adviser to the Governor on Education, Tokunbo Wahab, revealed the state government has ordered for their rehabilitation with immediate effect….Continue Reading.

NewsOnline Nigeria reports that embattled Nigeria’s minister of communications, Isa Pantami has been further enmeshed in controversy as a letter written against him has gotten the attention of the American embassy.
The letter, written by Deji Adeyanju was sent to the SSS and the American embassy some days ago and in an update shared by the writer on his Twitter page, it was seen that the representative of the American embassy has acknowledged the letter.
The content of the letter has to do with some comments the minister made some years back about a terrorist group that makes it look as if he supported their moves….Continue Reading.

NewsOnline Nigeria understands that for over a decade, there has not been clear information on how Boko insurgents are being funded.

According to a report by Daily Trust, the businessmen were arrested in an operation being coordinated by the Defence Intelligence Agency (DIA), and in collaboration with the Department of State Services (DSS), Nigerian Financial Intelligence Unit (NFIU) and the Central Bank of Nigeria (CBN).

The operation was said to have been approved by President Muhammadu Buhari in 2020.

The newspaper reported that an initial list of 957 suspects comprising bureau de change (BDC) operators, gold miners and sellers, and other businessmen is being acted upon.

A source, however, told the newspaper that about 400 persons have been arrested in Kano, Borno, Abuja, Lagos, Sokoto, Adamawa, Kaduna and Zamfara…..Continue Reading.

Sunday Igboho has been accused of terror over an alleged forceful collection of 500k Omo Onile Money.

According to an exclusive report by AllNews, the popular Yoruba Activist has been fingered as the man behind a squad, made up of thugs who intimidate landowners of Soka Area of Ibadan, Oyo State, South-West Nigeria.

Before now, Igboho has been accused of land grabbing, using armed thugs against original owners of such lands. But he has also in the past defended himself against the allegations on several occasions, saying he only fights on land matters “when he is invited to do so”.

Rightly so, in February 2020, Igboho led hundreds of youths to resist land grabbers who attempted to have forceful possession of a large expanse of land belonging to about 50,000 residents.

“What is it that the masses have done wrong? Is it because they don’t have money? Don’t ever come to this community again. This is the sixth time you would disturb these innocent people. A countless number of masses have died as a result of the actions of the hoodlums……Continue Reading.