Why I Can’t Date One Woman — Singer Tekno Spills

How I Make N400k Monthly Supplying Bread To Bandits In Kaduna

Rapper Illbliss Celebrates Daughter On First Birthday, Recounts How She Fought So Hard To Be Alive

Biafra: What I Will Tell Nnamdi Kanu If I Meet Him – Ikpeazu

by cephasrich
in Breaking News
0

President Buhari, Tinubu, Obasanjo, among other public figures and celebrities have topped the list of people that won’t make heaven.

NewsOnline Nigeria reports that a Twitter user identified as The Sheriff Of Calabar has taken to the microblogging platform to list out some top 10 personalities who are not making it to heaven come what may.

In the now-viral tweet,  Azeez Adeshina Fashola known professionally as Naira Marley who is a Nigerian singer and songwriter topped the list.

Naira Marley is known as the president of his controversial fan base, “Marlians”.

Also on the list are Nigeria’s President Muhammadu Buhari and popular APC Chieftain, Bola Ahead Tinubu.

NewsOnline Nigeria couldn’t ascertain the criteria used to select those who are on the list of people that won’t make heaven as an attempt to reach the author proved abortive by the time of filing this report.

Others in the list include; All APC members, Obasanjo, Tacha, All arsenal FC. and controversial OAP, Daddy Shokey among others. 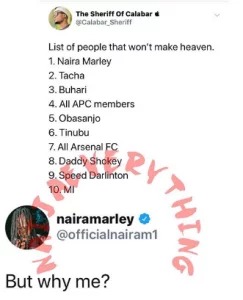 The Time For Diversification Is Now – Obaseki Speaks On Nigerian Economy