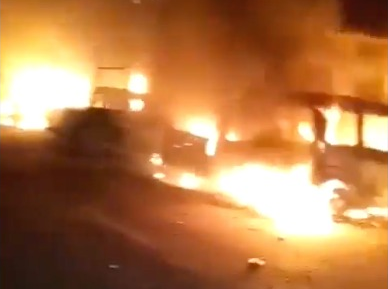 Police Headquarters in Anambra State is on fire.

NewsOnline Nigeria reports that unknown gunmen have razed the zone 13 police headquarters in Ukpo, Anambra state, during a violent attack.

This online news platform gathered that hoodlums invaded the station on Monday morning and opened fire on police officers.

It is not immediately clear those behind the attack or the extent of damage caused.

According to an eye witness who spoke to our correspondent, at aleast three vehicles were also razed in the incident.

The incident comes two weeks after the headquarters of the Imo police command was razed by unknown gunmen.

Tochukwu Ikenga, Anambra police command spokesman, said he could not provide details about the incident when contacted.

The attack comes amid the growing security incidents in Anambra whose governorship election scheduled for November 6 is fast approaching.

Willie Obiano, the state governor, recently raised an alarm over the worsening security situation, saying the state was under siege by criminals.

“I call on everybody, irrespective of affiliations to come together and support government and security agencies to fight our common enemy. Those who seek to destroy what we have laboured to build must not be tolerated in any manner,” Obiano had said.

Breaking: Buhari To Sack Isa Pantami And Hand Him Over To DSS

Apart from Anambra, other states in the south-east have been witnessing a spoke in criminal attacks and targeted assault against security agencies.

This online news platform understands that killings in the region tripled since the Indigenous People of Biafra (IPOB) formed its security arm.

The southeast governors had also launched a joint security outfit called Ebubeagu to curb the attacks, but not much has changed since they took the action.