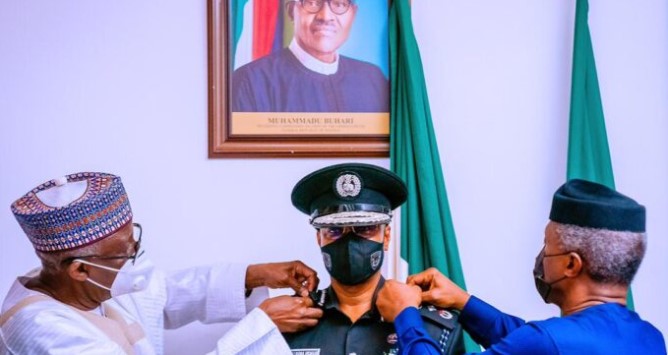 President Buhari Has Justified His Choice Of Baba As New IGP.

NewsOnline Nigeria reports that President Muhammadu Buhari after his return from London short rest explained why he chose Alkali Baba as the new acting inspector-general of police (IGP).

Following the announcement of the new position as earlier reported by NewsOnline Nigeria, Vice-President Yemi Osinbajo decorated the IGP on April 7, while Buhari was in London on a routine medical checkup.

The announcement of a new IGP generated several reactions on the constitutionality of the appointment — Mike Ozekhome, senior advocate of Nigeria (SAN), had stated that it is illegal for Buhari to solely appoint Baba.

However, Muhammad Dingyadi, minister of police affairs, had defended the president’s decision, stating that it wasn’t unconstitutional as Baba was appointed in acting capacity.

Speaking with state house correspondents when he returned to the country on Thursday, Buhari said he was given a list of candidates out of whom he chose Baba, adding that the new IGP has the necessary experience to perform in the position.

“Well, we went through the system. There was a committee by the minister of police affairs. They gave me some names and he happened to be the one chosen,” he said.

“He knows his job. He has been in it for a long time. He went through all the trainings. He has the necessary experience. So, we have high expectations of him.”

According to NAN, he also charged the new service chiefs to improve on efforts to secure the country.