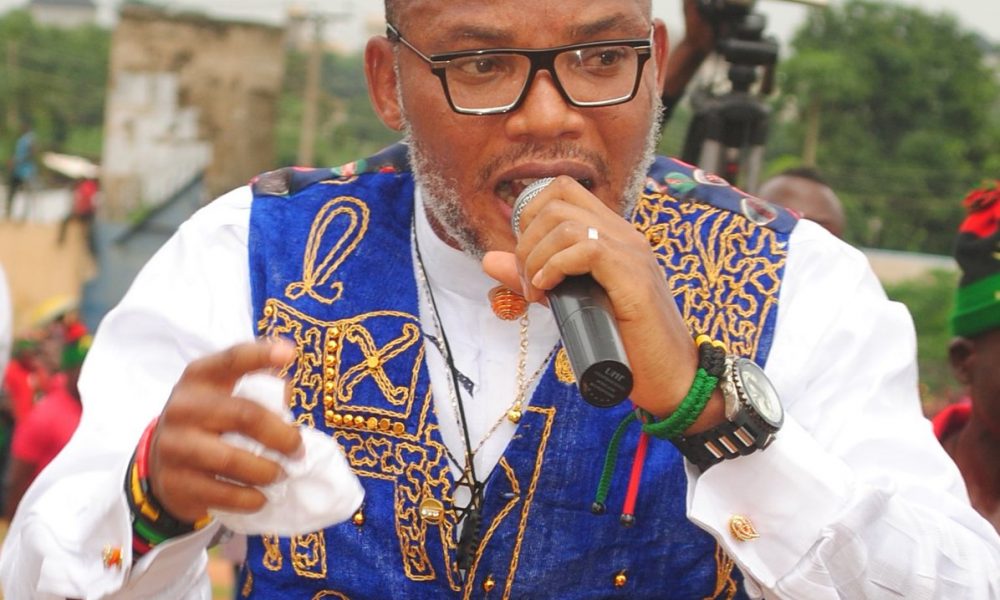 The leader of the Indigenous People of Biafra (IPOB), Nnamdi Kanu, has maintained that the decision to keep Nigeria united solely rests on the people.

Naija News reports that the wanted IPOB leader made this known in a post on his Twitter page on Friday.

According to the pro-Biafra activist, one Nigeria cannot be forced by the tribalized Nigerian Army or any other foreigner.

Nnamdi Kanu wrote: “#OneNigeria can neither be based on a business decision made by a Lugard, a Flora or any other foreigner nor by the force of a tribalized Nigerian Army or by the empty slogan that Nigeria is one.

“The decision to stay in one nation is a matter of the popular will of the people.”

In other news, the Peoples Democratic Party (PDP) has asked President Muhammadu Buhari to sack Nigeria’s Minister of Finance, Zainab Ahmed and replace her with a more competent individual.

The main opposition party made the call while reacting to the money printing saga rocking the nation.

It may be recalled that Naija News had earlier reported that Governor Godwin Obaseki of Edo State had accused the federal government of printing N60 billion to support states’ allocations in March.

“When we got FAAC for March, the federal government printed additional N50-N60 billion to top-up for us to share,” he had said.

Reacting, Zainab Ahmed had said the claim by the Edo governor is a lie.

She also described as sad a situation where a sitting Governor can make such an allegation.

She said: “The issue that was raised by the Edo State Governor for me is very, very sad. Because it is not a fact.”

But the Governor of the CBN, Godwin Emefiele stated that the money was meant as loan from the apex bank.

“If you understand the concept of printing of money, it is about lending money. There is no need for all the controversy around money printing as if we are going into the factory to print naira and then distribute on the streets,” Emefiele had said.

In a statement on Friday, PDP spokesperson, Kola Ologbondiyan, accused the minister of “attempting to mislead Nigerians” over allegations that the federal government printed.

“The PDP asserts that the admission by CBN Governor, Godwin Emefiele, that the apex bank has been printing money at the bidding of government, has vindicated its earlier stand that the Buhari-led APC administration is characterized by concealments, deceit and falsehood,” the statement read.