Controversial media personality, better known as Ifedayo Olarinde Daddy Freeze has recounted how he celebrated whilst reacting to the viral photos of a man who defaced his car to announce his divorce.

Naija News recalls a yet to be identified man who finalized his divorce on the 12th of April via his social media handle joyfully defaced his car to celebrate and announce it to fans and friends.

Sharing the photo on his Instagram, the father of two,wrote;

‘Na so me sef celebrate when my divorce over o..’ 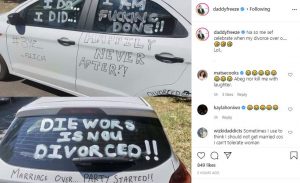 However, this reaction did not sit well with one of his fans identified as @Lolafluffs who called him out immediately. She wrote; ”I feel you, sir @daddyfreeze considering the alleged number of time your ex-wife beat you black, sometimes leading to you passing out glad for sir”

Reacting to the comment, Daddy Freeze wrote; ‘@lolafluffs you must have indulged in a little too much igbo this morning and gone ahead and mistaken your father at home for me. Na you papa for house dem beat pass out weyrey.”

Daddy Freeze has countlessly shared his not so good experience with his first wife, Opeyemi Olarinde, revealing his marriage to her was a big mistake. The couple divorced in 2017 and are blessed with two lovely children, Adun and Ayo. DJ Freeze is half Nigeria and Half Romanian. His father is from Osun state. He met his estranged wife, Ope, during his days at the University of Ibadan.