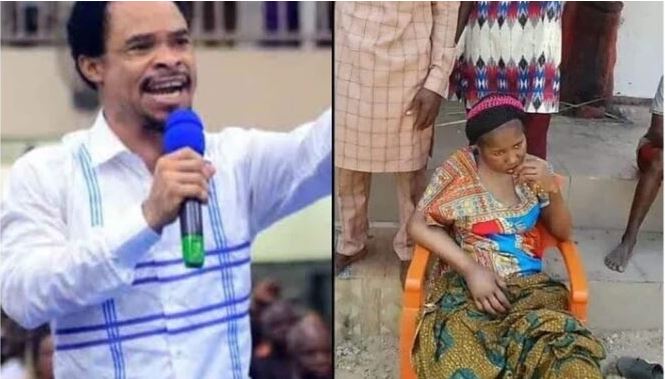 Prophet Odumeje has placed curses on sick Ada Jesus over her claim of fake miracles.

NewsOnline Nigeria reports that Prophet Odumeje whose real name is Prophet Chukwuemeka Ohanaemere, a controversial Anambra based prophet, who is the Spiritual Director of Mountain of Holy Ghost Intervention Deliverance Ministry World Miracle Center, alias Land of Freedom, has publicly refused to accept the plea of Ada Jesus, a comedienne who accused him of performing fake miracles.

This online news platform understands that a live video which was shared on the Facebook  page of Mountain of Holy Ghost Intervention Ministry owned by Prophet Odumeje, Ada Jesus could be seen laying on the floor of the church as Nollywood Actress Rita Edochie and Prophet Odumeje took turns to express their anger.

Recall that Ada Jesus has been sick and due to her recent predicament, she is reported to be visiting everyone she talked down against to ask for forgiveness.

Reports have it tha her predicament is medically impossible to treat as she has been advised to go and plead with some people she offended with her post on Facebook and got cursed by them to avert the curses laid on her.

Among the people she offended are Prophet Odumeje and actress Rita Edochie who Ada Jesus claimed helped to perform some fake miracles in his church and the man of God angrily cursed her and as a result, has been down with a stroke.

In a video which has gone viral, Prophet Odumeje maintained that he stills wonder how he got to know Ada Jesus for her to have the guts to attack him on social media.

Rita Edochie, on the other hand, also expressed her displeasure as she rains more curses on Ada whose illness has defiled medical treatment.

“Ada Jesus You can Never Get Up from the sickness, as long as I serve a living God. I help you from every source” Rita edochie maintained.

In the video, Ada Jesus and her family were seen in the church of Prophet Odumeje apologizing to him to forgive her so she can be well again but he reportedly refused to accept the apology.

Prophet Odumeje in the video, refused to accept the apology of Ada Jesus and her family as he only recounted how Ada Jesus damaged his image with the videos she made on social media, asking her to go and bring the others with her.

In the video, Rita Edochie is also heard saying, “You will go from her, you will die from this so that others can learn” – In Igbo

Watch the video of Prophet Odumeje, Rita Edochie and Ada Jesus below…

Below is the full video