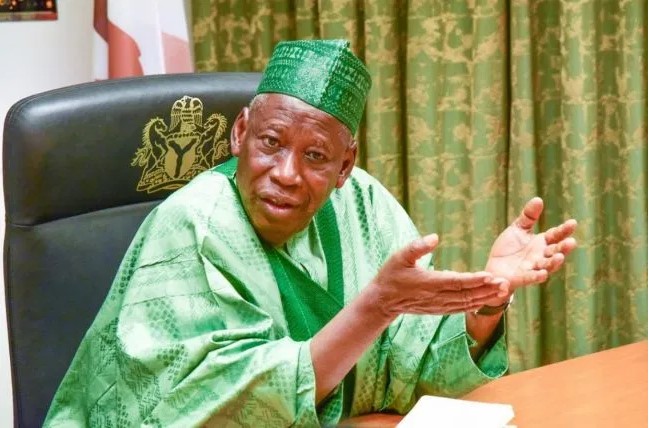 Ganduje Has Spoken On His 2018 Bribe Dollar Video, Says They Were Fake.

NewsOnline Nigeria reports that Governor Abdullahi Ganduje of Kano said several videos showing him stuffing bales of dollars into his pockets in 2018 were fake.

“No doubt the video is fake,” Ganduje told the BBC Hausa Service on Friday.

“We are making some underground plans, which we will not reveal. But I assure you it is fake, and all those behind it will be put to shame.”

READ: Sunday Igboho To Be Arrested On This Date By Buhari Government

But the case has not made progress in court.

On Friday, Ganduje took his case for self-exculpation to BBC A Fada A Cika programme, aired on Friday evening.

Asked by the interviewer to confirm whether he was the person in the video, Ganduje responded by saying that the video was doctored to show him collecting something.

“Even your picture can be tampered with to show something on your head or hand. And you know it’s possible. People always tend to believe a falsehood.

“The fact is that we will take action against the matter,” he said.

“Did he ever take a dollar bribe”, asked the interviewer.

Ganduje responded:“It is a lie. Nothing of that nature ever happened.

“But that is not the issue, the big issue that we will deal with those behind it,” he said.

The video damaged Ganduje politically and gave him the nickname ‘Gandollar’.

In the interview, Ganduje also spoke about the achievements of his administration.

The projects that the governor cited were the bridges he built in Kano, and the Muhammadu Buhari Hospital, which he said was equipped with state-of-the-art medical equipment.

He said the hospitals built by his government would reduce the number of people going abroad for treatment.