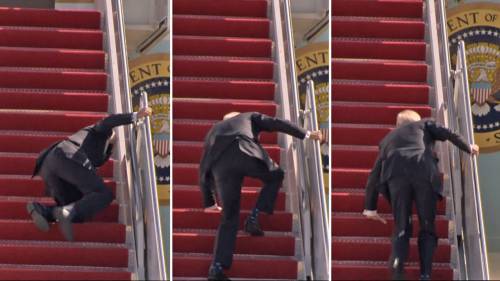 The President of the United States of America, Joe Biden, on Friday, stumbled three times while climbing the Air Force One.

The development which stirred reactions on the internet, saw citizens of the US question the health of their president.

At first, it was not clear if Biden tripped, but shortly after recovering he fell twice more before finding his way to the top of the stairs.

The president recovered to give a salute at the top of the stairs before departing to meet with Asian American community leaders in the wake of the massage parlour massacre in Atlanta, Georgia.

A video has been spotted showing the moment the US President fell while trying to find his way to the top of the Air Force One.

See the video below: