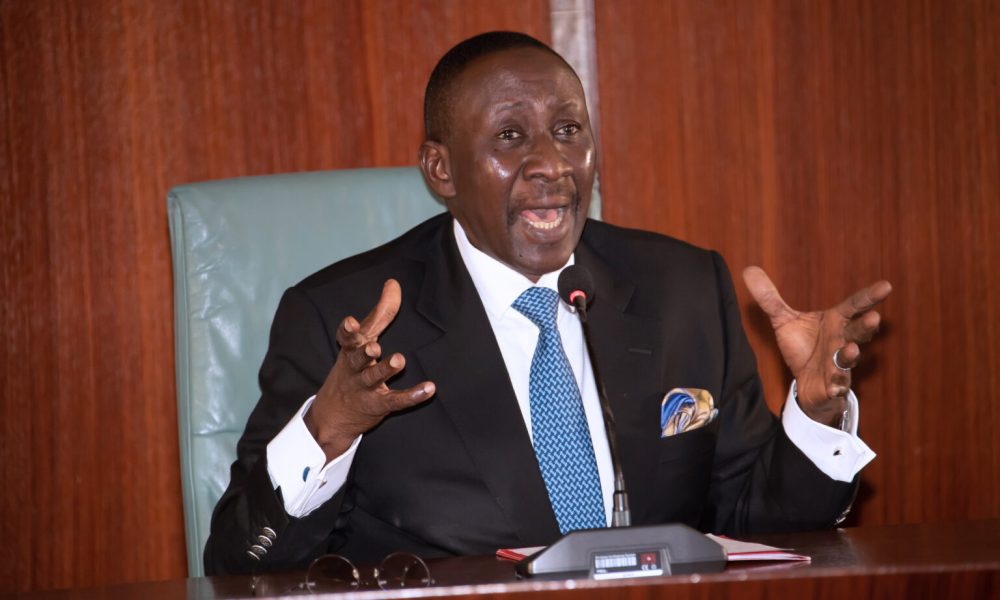 There are reports that the Economic and Financial Crimes Commission, EFCC, might seize some properties allegedly belonging to the National Security Adviser, Babagana Munguno.

According to SaharaReporters, the anti-graft agency has obtained an interim forfeiture order in respect of the properties linked to a former Director of Finance in the Office of the NSA, Brigadier-General Jafaru Mohammed.

Justice Folashade Ogunbanjo in her ruling granted an ex parte application for interim forfeiture of the assets and property by the chairman of the EFCC, made on March 9.

The assets traced to the proxies and associates of the General include House on Plot 7, God’s Own Estate, Road 1, Wamna District, Abuja; a fenced plot at No 1 Jubril Aminu Crescent, Katampe Extension, Abuja; plot at Kubwa Express, Directly opposite Abuja Model City Gate, Abuja; and a house on Block SD 22 House 2, Road 5, Kabusa Garden Estate, Abuja.

A security source that spoke with the news platform, claimed that Mohammed as the Director of Finance in the office of the NSA allegedly carried out many errands on behalf of Monguno.

“It is not a secret that the NSA had a confidante in the Director of Finance, who used proxies on the instruction of his boss to acquire those properties. It was a very close-knitted deal in the sense that it would be difficult to trace any of these properties to them.”

“But with this move by the EFCC, it shows they might have some credible information at their disposal.”

The source claimed that some top hierarchy in the Nigerian security architecture reported Monguno to President Buhari over the way he and Mohammed handled ONSA.

The source said, “The NSA is very skilled in presenting the holier-than-thou attitude in the public. But in truth, I think the rot in the ONSA under him is worse than that of Sambo Dasuki (ex-NSA boss). Monies were spirited out recklessly, and this prompted the military hierarchy then as it was to effect some changes in the ONSA.”

“This saw to the transfer of several officers including the Director of Finance and Administration, Brigadier General Jafaru Mohammed; the Special Assistant to the NSA, Colonel AA Ibrahim and the Director Legal Intercept, SS Shehu by the army hierarchy sometime in 2020 as a means to bring sanity into the ONSA which was excessively abused.”

Another top security source further corroborated this position when he stated that the NSA and his former Director of Finance and Administration indeed committed some infractions that went unnoticed by the EFCC under Ibrahim Magu.

“I am aware that this was one of the things that worked against the confirmation of Ibrahim Magu as the EFCC Chairman because the Department of State Services got wind of the dealings and subsequently made sweeping arrest that were at some point toned down because of the issues it would generate in the public,” he said.

“This new development is therefore not surprising as most of us saw it coming with the way and manner the NSA and the director of finance and administration almost ran down the ONSA. I can assure you that those properties would be forfeited to the federal government as none of them would come forward to claim ownership.”

“The NSA was cut to size when he attempted to get approval for arms purchase from third party sources against the government directive of the country-to-country transaction in arms purchase. This deal was leaked by one of the former service chiefs who ensured that the president was briefed and the NSA was subsequently rebuked. Since then, there has been no love lost between them and the NSA, who uses any opportunity to launch scathing attacks on the tenure of the former service chiefs.”

A source from the commission, disclosed that preliminary investigations revealed that the properties were held in proxy for Monguno.

“Those properties were acquired by the former Director of Finance and Administration in the ONSA acting on instruction from Monguno. We were able to trace the deal and all those whose names were used on behalf of the NSA.”

“There is every likelihood that the court would eventually grant a final forfeiture to the federal government, which would indeed be a welcome development.”