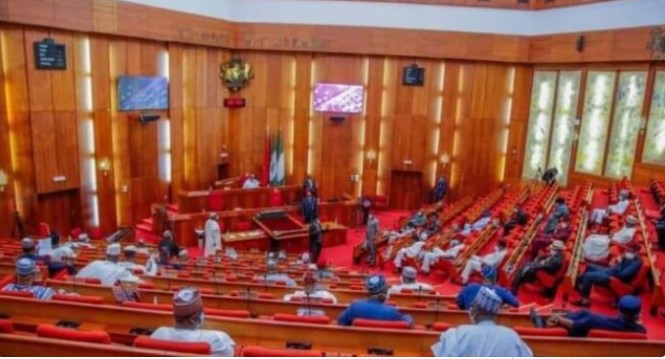 There was a commotion in the Senate over a bill seeking to establish a commission for the armed forces.

NewsOnline Nigeria gathered that Enyinnaya Abaribe, senate minority leader and sponsor of the bill, said the commission is needed to deepen federal character in the appointment of service chiefs and other heads of security agencies.

However, some senators kicked against the bill, saying the military will be politicised if the law is passed.

When it was put to a voice vote, the legislation was rejected by a majority of the lawmakers.

Not backing down, Abaribe rose to challenge the rejection of the bill which he blamed on Senate President Ahmad Lawan.

Lawan said it was a majority of the senators who rejected the bill — and not him.

He quickly called for a closed session which lasted for 15 minutes.

After the closed session, Abaribe withdrew his call for ”division” (a type of voting) and moved a motion for the proposed law to be considered on another legislative day.

While leading the debate on the bill earlier, the minority leader said the enactment of the legislation would strengthen Nigeria’s unity and integration.

“Provided that in making such recommendations the commission shall observe the federal character principle and adopt an equitable template to spread the offices of the service chiefs, and others corps and other ranks of the armed forces of the federation among the six geo-political zones of the country,” he said.

“The enactment of this bill will help strengthen our national unity and integration where the overall interest of all sections of the country is protected in line with order 77 (3) of our standing rules, the financial compendium is hereby attached.”