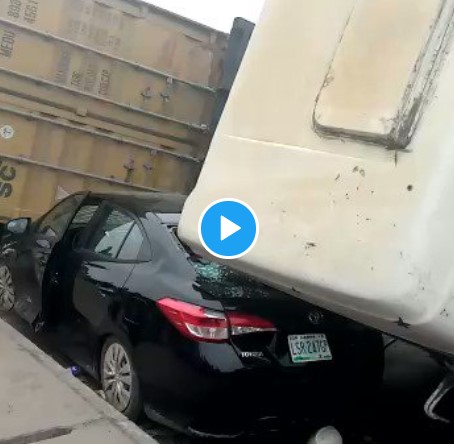 NewsOnline Nigeria reports that a 40-foot container fell three stationary vehicles and a tricycle in Lagos State on Monday. No life was lost.

The incident, which occurred in the early hours at Barracks Bus Stop inward Trade Fair, was said to have left many road users stranded for hours as a result of the traffic gridlock it caused.

The incident occurred precisely a year after a pipeline explosion occurred at Abule-Ado/Soba area.

According to eyewitnesses’ accounts, the accident occurred due to recklessness on the part of the truck driver, who lost control of the vehicle.

He said: “No loss of life or injuries recorded at the scene of the incident. The Agency’s team, the Police, the Nigerian Army, Ojo Cantonment 81 Division, are responders present at the incident scene.”

He added that the recovery operation was ongoing with the Agency’s heavy-duty equipment, Goliath 11, Super Metro and the light tow-trucks. Below are images from the scene.