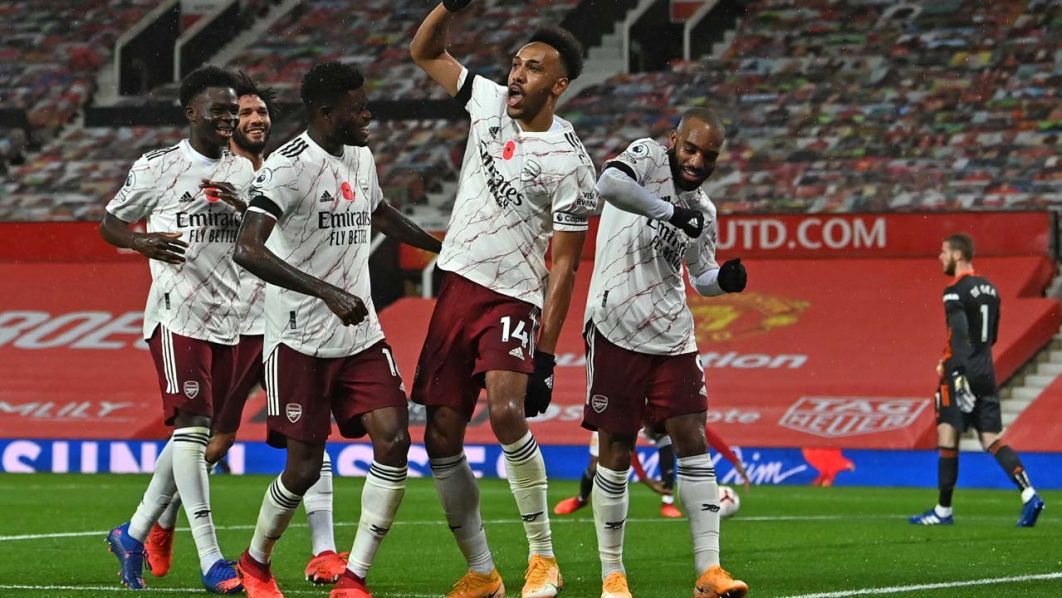 Pierre-Emerick Aubameyang condemned Manchester United to fresh misery at Old Trafford as the Arsenal forward’s penalty clinched a 1-0 win, while Newcastle stopped Everton from returning to the top of the Premier League with a 2-1 victory on Sunday.

Aubameyang ended a five-game goal drought in the league when he stepped up to convert a 69th-minute spot-kick after Paul Pogba fouled Hector Bellerin.

The Arsenal captain’s first league goal since the opening weekend of the season gave the Gunners their first league win at Old Trafford since 2006.

Donny van de Beek nearly fashioned a late equaliser when his cross was scuffed by Mohamed Elneny into the face of Arsenal keeper Bernd Leno and on to the post.

But United have failed to win any of their four home league games this season, with the three defeats including a humiliating 6-1 rout against Tottenham.

After an encouraging end to last season when they secured a top-four finish, United have gone backward and questions will be asked about Solskjaer’s ability to hold on to his job if results do not improve soon.

“We weren’t at the races. We were too sloppy and too many passes went astray,” Solskjaer said.

“Home and away form is out the window with no fans in the stadium. You can’t look at that. It doesn’t really mean too much. But we need to get points on the board.”

Arsenal moved up to eighth place after ending a two-game losing run in the league.

Mikel Arteta’s men were deserved winners, having dominated for long periods and hit the post through Willian in the first half.

“I’m delighted because we played with a lot of courage and big personality,” Arteta said.

“Every striker needs goals and in these moments we have to create more for Auba. He has scored the crucial goal and it is going to lift his confidence.”

Everton would have gone back above leaders Liverpool on goal difference with a win at St James’ Park.

But, with James Rodriguez and Richarlison missing from the Everton team, Carlo Ancelotti’s side succumbed to a limp defeat as Callum Wilson bagged his brace in the second half before Dominic Calvert-Lewin’s late reply.

It was a difficult day for Everton, whose England keeper Jordan Pickford was dropped, losing his place to Robin Olsen after a turbulent start to the season.

Newcastle took the lead in the 56th minute when Andre Gomes was adjudged to have fouled Wilson as he attempted to clear a corner at the near post.

It looked a harsh decision but Wilson stepped up to send Olsen the wrong way for his fifth goal of the season.

Wilson finished off Everton with a close-range effort from Ryan Fraser’s deflected cross in the 84th minute.

Ralph Hasenhuttl’s side lost their first two matches this term, but they have bounced back impressively and sit in third place after their fourth win in their last five games.

Southampton made their pressure pay in the 20th minute when Jannik Vestergaard headed in Ward-Prowse’s free-kick.

Ward-Prowse curled a stunning free-kick past Villa keeper Emiliano Martinez from 25 yards in the 33rd minute, then netted another majestic free-kick on the stroke of half-time.

Tyrone Mings reduced the deficit in the 62nd minute and Ollie Watkins converted a 90th-minute penalty after a foul on Grealish, who scored Villa’s third with the last kick.

Tottenham host Brighton in the final match of the day looking to go second with a win.

Farewell to all that?