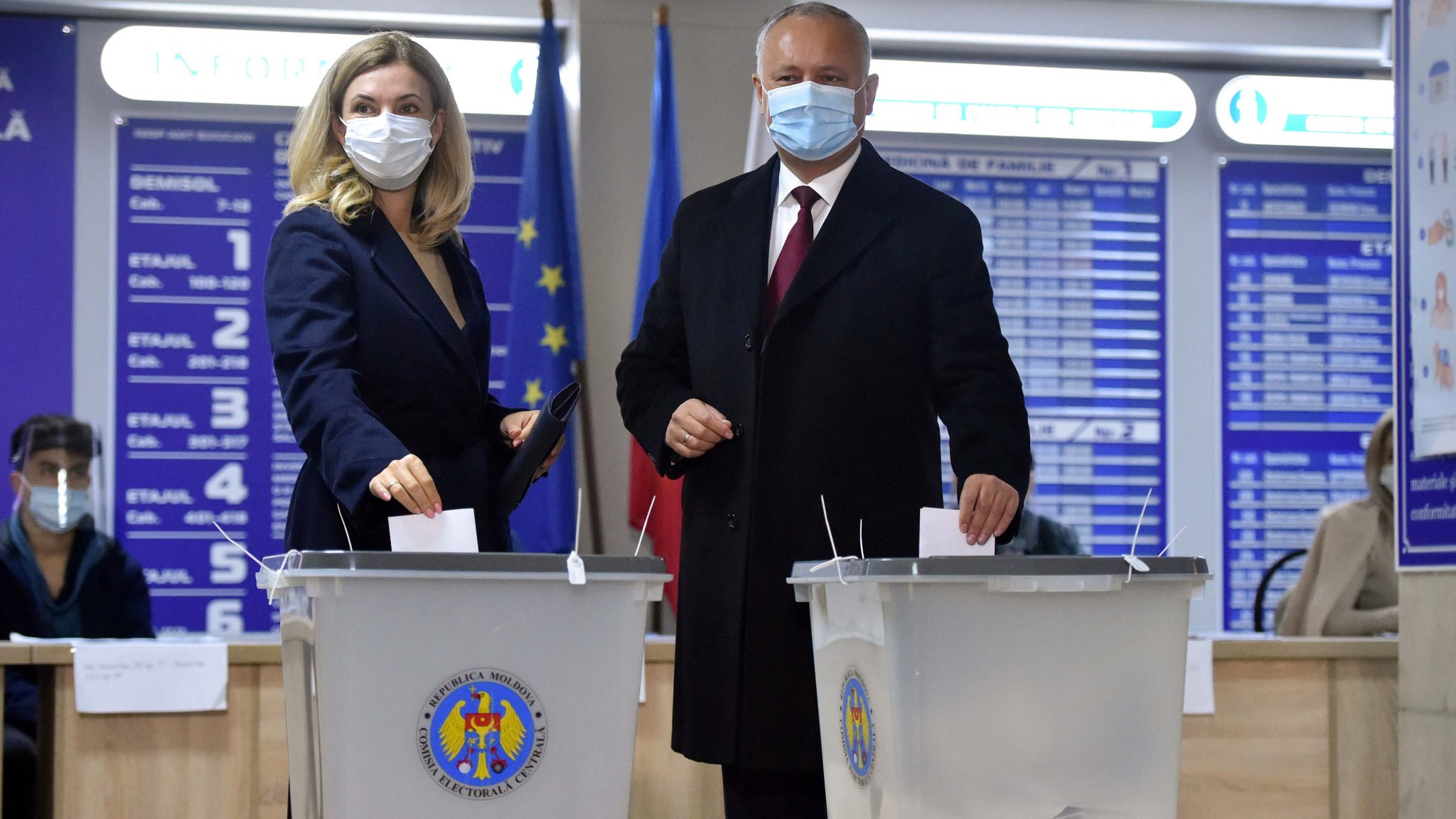 Moldovan President and presidential candidate Igor Dodon and his wife Galina cast their ballots at a polling station during Moldova’s presidential election in Chisinau on November 1, 2020, amid the ongoing coronavirus disease pandemic. (Photo by Sergei GAPON / AFP)

Voters in ex-Soviet Moldova went to the polls on Sunday to elect a president under the watchful eye of Moscow which wants the polarised country to remain in its orbit amid political and security crises on Russia’s borders.

Experts predict a second-round runoff on November 15, as neither Dodon nor Sandu are expected to secure an outright majority on Sunday.

The impoverished country of 3.5 million has long been divided between those favouring closer ties with the EU and those who cling to Soviet-era relations with Moscow.

Although part of the Soviet Union until its collapse in 1991, the tiny country between Ukraine and Romania has close historic ties with Romania and its main language is Romanian.

Many voters, wearing masks against the coronavirus, expressed disappointment with politicians as they cast their ballots in the rainy capital Chisinau.

“We have been waiting for a change for 30 years,” Vasile Mardare, a 64-year-old physical education teacher, told AFP.

“I voted for the candidate who will bring Moldova closer to Western living standards.”

In recent years, Moldova has been rocked by multiple political crises and a $1 billion bank fraud scheme equivalent to nearly 15 percent of the country’s GDP.

Casting his ballot with his wife Galina, Dodon said the country was tired of upheaval.

“More than ever, Moldova must keep away from chaos,” he said.

“I have voted for a strong Moldova, for economic development and political stability and for balance in relations with our foreign friends and partners.”

Dodon, 45, came to power after beating Sandu in a 2016 election and is hoping to defeat her again.

Sandu is a 48-year-old centre-right politician who worked for the World Bank and briefly served as prime minister between June and November 2019.

“I voted for a state which works for its citizens, which creates employment opportunities and improves living conditions,” she said while casting her vote.

“But for that we must drive out the corruption and incompetence of the presidency.”

Six other candidates are contesting the vote.

Russian President Vladimir Putin has expressed hope that Moldovan voters would back Dodon, noting their country’s economy — battered by the coronavirus outbreak — is firmly linked to Russia.

With President Alexander Lukashenko facing unprecedented protests after a disputed August election in Belarus, Moscow is keen to avoid any further chaos among allies on its western borders, experts said.

Valeriu Pasa, an analyst with the think tank WatchDog Moldova, compared the polls to a “referendum on Dodon’s mandate” and said Moscow was seeking to maintain the status quo in Moldova.

“The current regime is fully subordinate to the Kremlin,” Pasa told AFP.

Dodon, who served as economy minister under a Communist government between 2006 and 2009, has promised continued close ties with “strategic partner” Moscow and has said the Russian language should become compulsory in schools.

“He’s a good man and a good president,” she told AFP on the eve of the vote, insisting that the Moldovan leader had been prevented by opponents from fully implementing his programme.

Russia last week accused the United States of preparing a “revolution” in Moldova.

The head of Russia’s Foreign Intelligence Service (SVR) Sergei Naryshkin alleged that Washington was inciting the Moldovan opposition to take to the streets after the vote to denounce its validity and demand a re-run.

Russia has troops in Moldova’s Moscow-backed breakaway region of Transnistria, which broke away after a brief civil war following the collapse of the USSR in 1991 and is not internationally recognised.