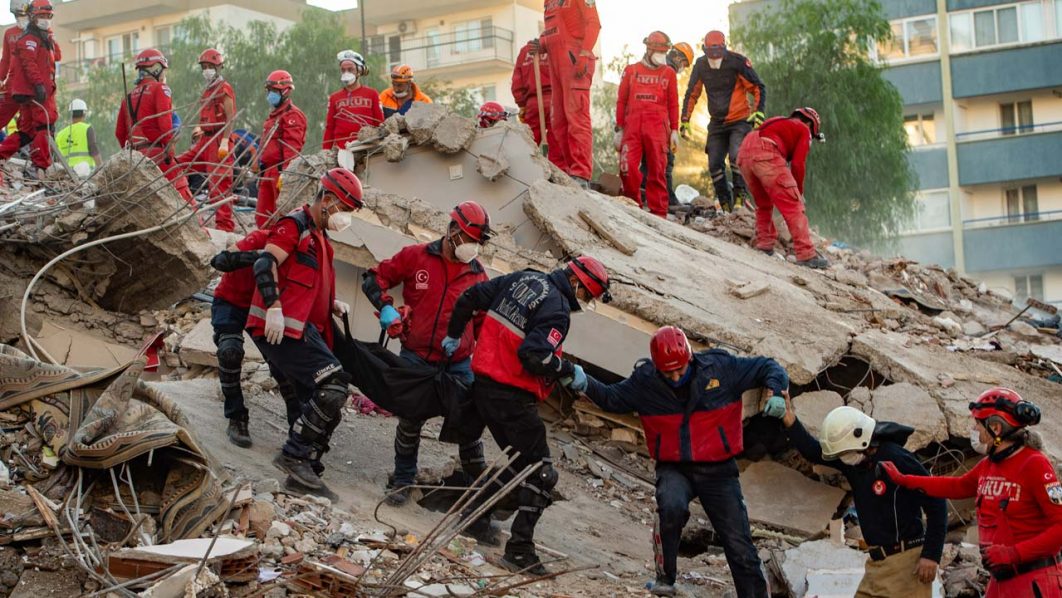 Rescue personnel carry the body of a child from the debris of a collapsed building in the Bayrakli district of Izmir on November 1, 2020, after a powerful earthquake struck Turkey’s western coast and parts of Greece. – Rescue workers are searching eight buildings in Izmir on November 1, despite dwindling hope for survivors, as the death toll of a powerful magnitude earthquake which hit western Turkey rose to 49. The 7.0-magnitude quake has also injured 896 in Turkey, the Turkish emergency authority AFAD said, after striking October 30, near the west coast town of Seferihisar in Izmir province. (Photo by Yasin AKGUL / AFP)

The Nigerian leader’s condolence message was contained in a statement issued by his Senior Special Assistant on Media and Publicity, Malam Garba Shehu, in Abuja on Sunday.

Buhari commiserated with the bereaved families in Turkey’s city of Izmir and Greece’s island of Samos.

He condoled with the two countries as they strive to recover from the earthquakes.

“The government and people of Nigeria stand in solidarity with Turkey and Greece in this trying period, as they deal with the unmitigated fallouts of the natural disaster,’’ the president added.

He prayed for the repose of the souls of the dead and wished the injured quick recovery.